In October 2018, Nutricia North America confirmed that they would no longer be importing and distributing Wel-Plan, the low-protein baking mix on which so many PKU families had relied for decades. Shortly thereafter, Cook for Love undertook a semi-scientific project to try to determine the best replacement for Wel-Plan: A baking mix that was accessible, affordable, and versatile enough to work in all the recipes Wel-Plan had worked in.  Cook for Love received a grant from Nutricia to support the project, and donations of mixes from the following companies: Cambrooke Foods, Cook for Love, Flavis, Nutricia, Promin, and Taste Connections. We’d like to thank these sponsors for making this project possible, and also thank the volunteers who gave their time & taste buds to help us narrow down the competition. The results are in, and they are definitive (sort of).

Cook for Love surveyed the community to determine the most well-loved recipes across four baking categories (muffins, cake, cookies and bread) that used Wel-Plan. The winners, all from Low-Protein Cookery for PKU by Virginia Schuett, were:

Cook for Love fired up the test kitchen and originally tested eight (8) mixes for each recipe.

Following the original tests, the top 3 mixes made it to the finals. Sadly, the Cook for Love baking mix didn’t make the cut: Brenda proclaimed the Applesauce Muffins made with CFL mix to be  “a disaster: Too firm, dense, didn’t rise well; doesn’t taste good.”

While the test kitchen heavily favored the homemade mix, the finalists were: 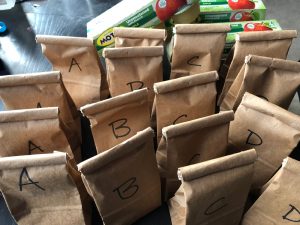 This is the most important part of the project. We asked for volunteers to test each of the four recipes. To be selected, they had to be able to cook within the required time frame and have made the recipe, with Wel-Plan, in the past. This is important because  we were seeking the mix that most closely replicated the experience of Wel-Plan, so we needed people used to the taste, appearance, and consistency of these recipes when cooked with Wel-Plan. For each of the four recipes, we enlisted 4-5 test cooks and sent them the mixes, unlabeled, so that there would be no unintentional bias, Unbeknownst to our testers, they were also using actual Wel-Plan as one of their test mixes.

We asked each tester to rank the baking result of each mix from best to worst on the following criteria:

Amazingly, in 75% of the tests, the testers did not choose Wel-Plan as their favorite!  Ultimately, the scores for the top two — Homemade and Cambrooke + Baking Mix, were very close. We analyzed the ratings as an overall average, and for each category, but that did not affect the rankings.

Thank you again to our sponsors:

And to our Test Kitchen Cooks:

» In recipes using Wel-Plan, 1 cup weighed 110g, so that was the measurement used in recipe testing, and in this chart. Weight per cup may vary among mixes.

Strength of Community, Power of Data.