Researchers at Clemson University have been working over the past five years on the development of a urine test as an at-home monitoring method for blood Phe level. Clinical support has been provided by the Greenwood Genetic Center, Greenwood, SC and Dr. Rani Singh’s group of the Department of Human Genetics, Emory University, Atlanta, GA. Following initial development and validation, a small one-year clinical trial was begun earlier this year in June, which was coordinated with the assistance of the Tennessee PKU Foundation and the Vanderbilt Children’s Hospital in Nashville, TN. We currently have 14 enrolled participants with PKU in this ongoing clinical trial. The clinical trial results are very encouraging with the average difference between the blood Phe levels estimated by the urine test vs. the corresponding laboratory-reported blood Phe levels being less than 1.5 mg/dL. The current prototype test works by dipping a test disc into a sample of urine and placing it under an LED-lit light-control enclosure. A photograph of the disc is then taken using a smartphone after just one minute.  The color of the disc from the photograph is then read using an RGB color app to provide a quantitative value of the color response.   As shown in the accompanying graphic, the color of the center hole in the test disc becomes darker as blood Phe level increases and is used to provide an estimate of the corresponding blood Phe level. Clemson University is currently negotiating a license agreement for this technology (patent pending) with a major urine-test company, with a target of having a commercially available product for the PKU community by the end of 2020, or the early part of 2021. Funding support contributing to the development of this technology and the ongoing clinical trial has been provided by the National PKU Alliance.

Aptatek Biosciences
Statement provided by Aptatek; Device In Development has received Breakthrough designation from the FDA 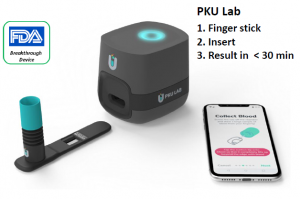 Aptatek’s portable PKU lab consists of a disposable test cartridge, a battery-powered, Bluetooth-enabled test reader and a cell phone app. The system uses DNA aptamers to quantitatively and sensitively detect phenylalanine in 5 microliters of capillary (finger stick) blood. The user collects the blood sample using the cap of the disposable cartridge, screws on cap to mix blood with test reagents, and allows test to sit for a few minutes. When ready, the test cartridge is inserted into the reader for analysis. The cell phone app is securely linked to the user and the reader and guides the user through the test steps. Once completed the results will be displayed on the app and can be shown as daily or weekly (or longer) results and exported to other apps or clinicians. The system is undergoing FDA review and Aptatek will conduct a clinical trial in 2020. Aptatek has received Breakthrough Device status from the FDA, which will help streamline the approval process. Long term, Aptatek envisions the system to be a home health hub, connectable to smart home devices to make monitoring phe levels at home an easy-to-manage part of any PKU family’s routine.